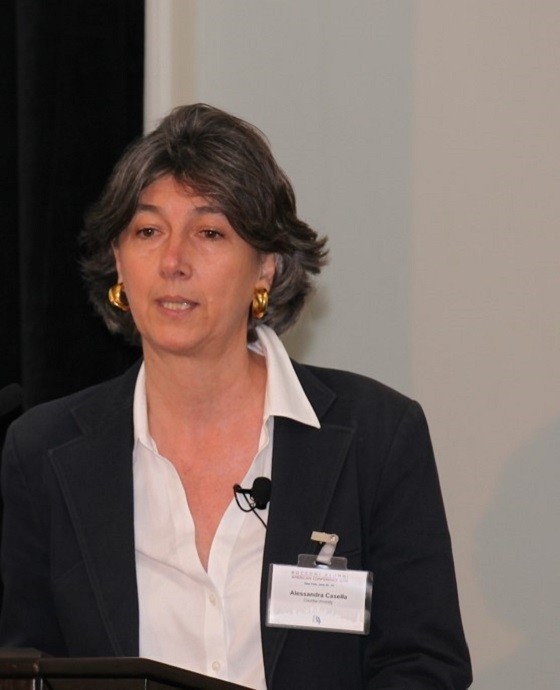 Alessandra Casella is professor of Economics and professor of Political Science at Columbia University and a fellow of the National Bureau of Economic Research (Cambridge), and the Center for Economic Policy Research (London). She received her PhD in Economics from MIT in 1989, taught at UC Berkeley before moving to Columbia in 1993, and held the position of Directeur d’ Etudes (temps partiel) at the Ecole des Hautes Etudes in Sciences Sociales (EHESS) (Paris and Marseilles) from 1996 to 2010. Her main research interests are political economy, public economics, and experimental economics. Casella has been the recipient of numerous fellowships: she has been a Guggenheim fellow, a member of the Institute of Advanced Studies in Princeton, a Russell Sage fellow, and a Straus fellow at the NYU Law School. Her book "Storable Votes. Protecting the Minority Voice" was published by Oxford University Press in 2012. Casella is Director of the Columbia Laboratory for the Social Sciences.

Storable Votes and Judicial Nominations in the US Senate, Journal of Theoretical Politics, forthcoming

Vote Trading with and without Party Leaders (with Thomas Palfrey and Sebastien Turban), Journal of Public Economics, 2014

Competitive Equilibrium in Markets for Votes (with A. Llorente-Saguer and T. Palfrey), Journal of Political Economy, 2012

A Test of Storable Votes Using Field Data (with S. Ehrenberg, J. Shen and A. Gelman), B. E. Journal of Economic Analysis, 2010

A Simple Scheme to Improve the Efficiency of Referenda (with A. Gelman), Journal of Public Economics, 2008

Information Channels in Labor Markets. On the Resilience of Referral Hiring (with N. Hanaki), JEBO, 2008

An Experimental Study of Storable Votes (with A. Gelman and T. Palfrey), Games and Economic Behavior, 2006

Public Goods in Trade: On the Formation of Markets and Jurisdictions (with J. Feinstein), International Economic Review, 2002

The Role of Market Size in the Formation of Jurisdictions, Review of Economic Studies, 2001

Politics in the Lab